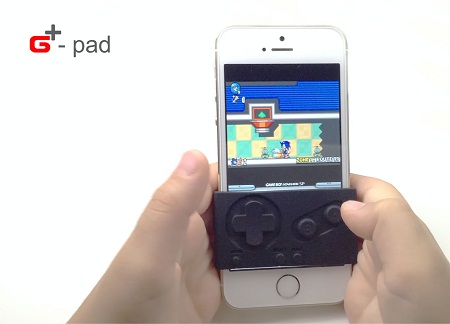 Getting a Game Boy growing up was certainly a defining moment. You could play all the games you wanted, and the only thing to stop you would be the batteries dying. It is a marvelous age, that we can now play a huge variety of games on our phone. The only major difference being that your D-pad, A, B, start, and select buttons are flat.

There are of course, a huge variety of games out there that don’t have these controls such as racing games or Angry Birds. If you primarily play phone games like Mario, Sonic, or Donkey Kong that do have those controls though, then you know how important that tactile feedback is (it’s nice for all games, but a smartphone can only do so much). If you wish you could get back that glorious feeling of button-mashing, then the G-Pad is here to help. This is a lightweight silicone rubber phone cover that will give you squishy buttons. This is mainly meant for iPhone gamers who are tired of being at a disadvantage because they can’t feel if they’re on top of the buttons or not.

While this is a great idea, it is a bit specific in its audience. If a game doesn’t have this button comp, then you’ll have to take this off and have one more thing to stash in your bag. They’re not terribly expensive at around $13, but they are for a niche audience.

Available for crowdfunding on indiegogo