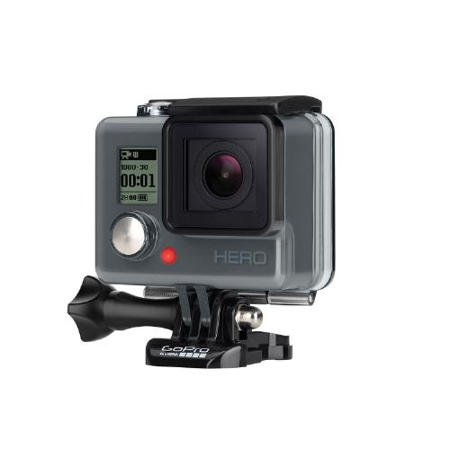 It does look as though life gets pretty much monotonous after a while, and the search for the next big thing tends to require something which is whole lot more outrageous than before, prior to it picking up the relevant amount of attention along the way. Well, if you have ever gone for some adrenaline pumping activities like bungee jumping and tried describing the experience to your friends, a thesaurus might not do you justice – which is why it is better to record the entire jump. What better way to do so than to capture it on video for posterity? GoPro is an old hand at rugged adventure cameras, and their latest device, the high performance HERO4, has just been announced.

Basically, the GoPro HERO4 will arrive in two different editions – the GoPro HERO4 Black which will retail for $499, while the Go Pro HERO4 Silver will cost $399. Both of them will make use of GoPro’s Emmy Award-winning imaging technology that merges enhanced ease-of-use and powerful new features such as 4K30, 2.7K50 and 1080p video capture (Black) and built-in touch display convenience (Silver), making it a whole lot easier and more convenient for you to capture a video selfie while you are embarking on an adrenaline pumping experience.

The GoPro HERO4 Black is touted to offer up to double the performance of its best-selling predecessor, where it is now capable of capturing cinema-quality 4K video at 30 frames per second, 2.7K video at 50fps and 1080p video at a blistering 120fps, which more or less does way with the rolling shutter issue in many scenarios, all the while paving the way for time-bending slow motion effects. Not only that, the HERO4 Black will also come with an entirely redesigned audio system which will be able to capture high fidelity sound with twice the dynamic range of previous models. There will also be other enhancements such as improved image quality, low light performance, highlight moment tagging and an improved user interface, making this the highest performance GoPro to date.

As for the GoPro HERO4 Silver, it comes with similar professional image quality as the HERO4 Black, although it lacks some of the higher performance video capture modes such as 4K30, 2.7K50 and 1080p at 120fps. There is a brilliant built-in touch display though, paving the way for convenience and ease-of-use.