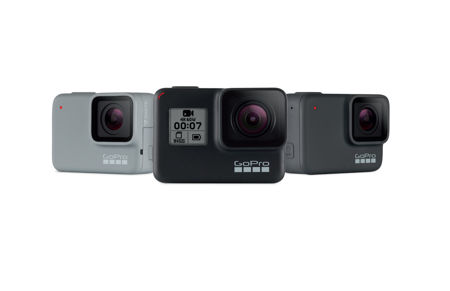 When it comes to action cameras, one particular name stands out from the rest of the crowd: GoPro. It is often used as a noun by many casual users to describe any action camera without having to be specific, which is proof enough that GoPro has done a great job in delivering quality action cameras that stand the test of time (and feeling of wanderlust). Their latest flagship product would be the HERO7 Black, carrying a $399 price tag while raising the ante when it comes to video stabilization courtesy of its standout feature, HyperSmooth.

With the HyperSmooth video stabilization feature, you will find that capturing and manipulating your digital video with the HERO7 Black becomes easier than ever before. In addition, it boasts of Live Streaming, TimeWarp Video, SuperPhoto, improved audio, and face, smile and scene detection. HyperSmooth has been touted by GoPro to be the best in-camera video stabilization ever featured in a camera, although we are quite confident that such hallowed status will change with subsequent generations of the GoPro action camera range. For now though, it will remain at the top of the hill, allowing users to capture professional-looking, gimbal-like stabilized video without the expense or hassle of a motorized gimbal. Not only that, HyperSmooth will work equally well underwater and in high-shock and wind environments where gimbals fail.

Knowing how we are all social creatures, GoPro has also ensured that the HERO7 Black action camera ends up with the distinction of being the first GoPro to be able to perform live stream, letting you share what is going on in real time to Facebook, Twitch, YouTube, Vimeo and other platforms internationally. This lets you show the rest of the world what you are up to at that point in time without any of the shaky cam movements.

Ultimately, at that price point, you get to enjoy stunning image quality of 4K video and 12MP photos, and with it being rugged enough to handle video shoots underwater without a housing for up to 33 feet, it is a no-brainer as to which action camera one should purchase.