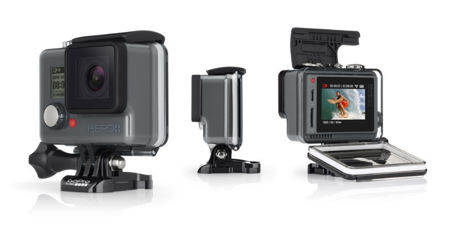 While there are many different kinds of action cameras in the market, you can be sure that there is one name that stands out for many, and that would be the GoPro moniker. After all, GoPro is an old hand (relatively speaking, of course) at this particular industry, and they have delivered their fair share of hardy action cameras in the past. The company has also announced its latest GoPro HERO+ LCD camera which is more than capable of capturing life-like high definition in 1080p60 video as well as stills in the form of 8MP photos.

What makes the GoPro HERO+ LCD action camera even better and more user friendly would be the fact that it comes with a convenient touch display that will pave the way for easy shot framing, a settings control as well as access to an all-new in-camera video trimming feature. Similar to the entry-level HERO, the HERO+ LCD happens to be built directly into its waterproof housing, which means you should not have any kind of worry concerning the durability and robustness of the device when the situation around it gets wet and watery. Not only that, the overall simplicity of this all-in-one design will combine with expanded features so that capturing life’s memorable moments becomes easier than ever before.

This little action camera is rugged and waterproof to 131′ (40m), and the HERO+ LCD will also come with advanced features such as HiLight Tagging and in-camera video trimming in order to make it easier to identify and share your favorite moments. HiLight Tagging would enable one to mark key moments while recording and during playback, so that you need not waste precious minutes hunting down the exact moment much later on, while the all-new video trimming feature will enable one to create short clips in-camera for easier sharing without the need for a computer around.

There will also be integrated Wi-Fi and Bluetooth connectivity so that the HERO+ LCD will play nice with a GoPro App-enabled smartphone or tablet. The asking price for the GoPro HERO+ LCD ain’t too steep either, as it goes for $299.99 a pop.