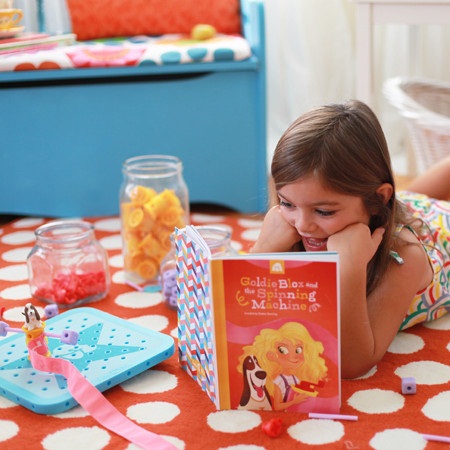 If you’ve gone into basically any store that sells toys for children, it’s pretty obvious which aisle is for boys, and which is for girls. There’s an apparent divide between pink and…everything else. There are a ton of toys in the boys aisle that encourage taking things apart and putting them back together. Most things for girls rely on your imagination for pieces that are already constructed. There are, as always, some in-between options, but it’s hard to dispute the overall state of things.

Debbie Sterling grew up with this weird marketing agenda for kids, and because of it (and other reasons of course) never considered that she could go into a career path such as engineering. She is now the inventor and CEO of GoldieBlox, which makes construction sets that are aimed at little girls. These will hopefully inspire a desire to build and create at a young age that goes beyond LEGOs.

There are tons of DIY projects available in each set, which has prices that varying from $20-30. Each are story-driven, and there is also an expansion pack should your little one decide they want to build beyond what’s in the instruction manuals. This is a great idea to provide a safe space for little girls to express themselves in a way that is more than ‘playing house’ with Barbie dolls. It’s merely a way to start changing the perception about women and engineering-based fields of work.

Available for purchase on GoldieBlox