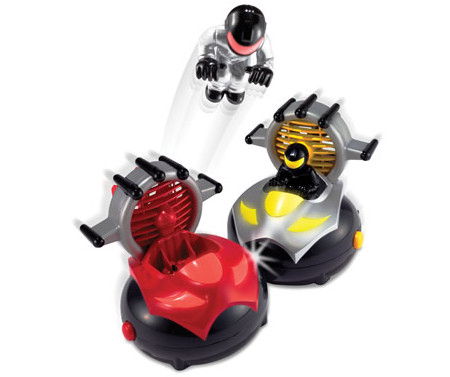 All work and no play makes Jack a dull boy (and Jane a dull girl, if you would want to be politically correct that is), which is why having a decent amount of relaxing time too, would be able to help restore the balance in one’s life other than stressing it out for weeks on end which could result in a breakdown sooner or later. Having said that, here is the $59.95 Glow In The Dark Driver Ejecting Bumpercrafts that are remote controlled, and as their name suggests, these phosphorescent bumpercrafts will see a couple of players go up against one another in a duel that is meant to unseat one’s opponent driver.

Each bumpercraft will feature an impact area button located on its left and right; and whenever the button is struck by an opposing bumpercraft, there will be a built-in spring that will eject the craft’s driver out of its seat. Each player will have full control one of the bumpercrafts thanks to a radio-controlled remote that allows one to move it forward, backward, left, and right – within a 10′ radius, of course. This particular set of toys would work best when you play it on smooth, level surfaces, where each bumpercraft would be able to move on a couple of partially concealed drive wheels and a single guide wheel. Recovered drivers can be clicked back into place easily. The Glow In The Dark Driver Ejecting Bumpercrafts would run on 10 AAA batteries, which means it works best with rechargeable batteries in the long run. Having them glow in the dark is certainly an improvement over its predecessor.