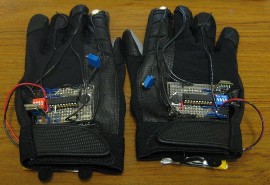 Once again, someone has imitated the futuristic science of Minority Report to create a gesture-based computer. In this case, these developers from MIT decided to use black gloves, similar to the ones that Tom Cruise wore at the beginning of the film.

You can see the video of the Glove Mouse after the jump. According to the vid, it took less than $100 of technology in order to make the Glove Mouse work. It has an LED on the back of the index finger, then a low resolution webcam to make it act as a cursor.

I have to admit, I don’t remember Tom Cruise’s computer having two hands that act as cursors, but I honestly can’t think of a better way to interface with a computer using two hands. You will note how the user can expand and focus in on a map of MIT.

This Glove Mouse is designed by Tony Hyun Kim and Nevada Sanchez, and they have been working on this project for some time. They have even won MIT’s George C. Newton Project Prize in 2009.

I suppose this will eventually lead to computers where the user has a pair of gloves instead of a mouse, and I wonder if this will save us some time when we run certain applications. This should probably be the goal of a Glove Mouse.