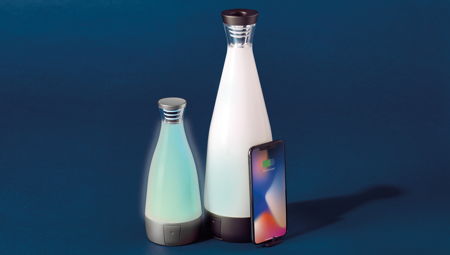 When it comes to charging up our mobile devices, we have different avenues to choose from these days, mainly between wired and wireless charging. Of course, the former is the most popular for the simple fact that it is the de facto standard, but wireless charging is fast catching up. While not all devices offer wireless charging capability, the growing number of third party wireless chargers released in the market is a growing testament of its popularity. Gloo is one such example, a sleek wireless charging station that also functions as an ambient light source.

The Deconnect team’s brainchild, Gloo happens to be different from current wireless charging stations that are being sold in the market, as Gloo will arrive in a couple of sizes: Mini and Regular. In addition to that, you will be able to pick from five finishings so that it can seamlessly blend into virtually any number of spaces, courtesy of its sleek bottle-shape, cable-free design and proprietary wireless surface charging technology. There is a 20,000 mAh battery underneath the hood of the Gloo Regular, allowing it to deliver up to eight full smartphone charges sans wires via Qi technology and by USB. Of course, the Gloo Mini will have a smaller battery and thus, lesser charging capability. The number of charges it can offer will also be influenced by how much you use the Gloo as an ambient light.

Not only that, Gloo as an ambient lighting system can be controlled through a mobile app in order to create the right kind of atmosphere in the room it is placed. In the future, the Gloo Regular will play nice with the high resolution Gloo 360 Cam accessory to have it snap panoramic photos and video in the very same room itself, now how about that for innovation?

Those who would like to be Super Early Bird backers for Gloo on its Kickstarter campaign will be able to pick up the Gloo Mini and Gloo Regular for $59 and $119, respectively, before the regular prices of $99 and $199, respectively, kick in afterwards.