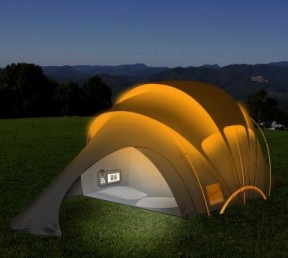 The Glastonbury Solar Concept Tent definitely qualifies as Coolest Gadgets material, as it has more gadgets on it than MacGyver’s knife. The U.K. company Orange has called the Glastonbury as “the tent of the future”, but this is one that I want to take “out on the rough” right now.

The tent has photovoltaic fabric, specially coated solar threads woven into the fabric. It can capture the rays of the sun and use them for some juice later. Yes, you don’t worry about your GPS or mobile phone going dead on your next camping trip. Not only that, the tent has a wireless control hub that keeps track of the energy generated and consumed. This hub has an LCD screen and even has a wireless Internet signal.

Another advancement is Glo-cation technology. This enables campers to find their tent using an SMS message or automatic active RFID tech. So if you’re having trouble finding your tent, sent a text, and the Glastonbury will glow for you.

There is yet another feature known as groundsheet heat. It is an internal heating element that is embedded within the tent’s groundsheet, and this underfloor heater will automatically come once the interior temperature falls below a certain level.

With all these features, who wouldn’t want this concept to become a reality? I’ll tell you who wouldn’t: those who truly want to “get away from it all” by camping. Doesn’t that usually mean you leave the comforts of technology behind?