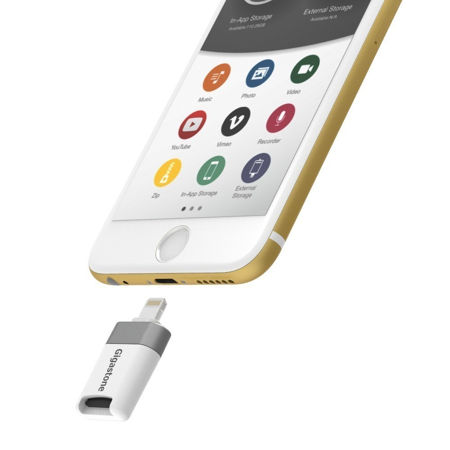 If you happen to own a drone and love flying it around to capture all kinds of scenes and videos from various angles, while communicating with your iPhone, then perhaps you might want to consider what Gigastone has in store. Their most recent release comes in the form of the Gigastone CR8600 iPhone Flash Drive Micro SD Card Reader, making it the perfect addition for drone fans who are rocking to iPhones and iPad with Micro SD Cards.

What makes the newest Gigastone CR8600 iPhone and iPad Flash Drive be the ideal companion when it comes to iPhone and iPad drone enthusiasts? Plenty actually, with the main capability being it be able to take the standard Micro SD card memory to new heights. It will arrive with best-in-class Gigastone complimentary iOS software to boot, ensuring that it ends up as an invaluable tool where drone pilots are concerned.

Basically, with this device, drone gadgeteers are allowed to fly their drone, take video and photographs and immediately view the multimedia on their iPhones or iPads, all without having to bring a laptop with them. It makes plenty of sense, really, as most of the drone cameras out there make use of Micro SD memory cards to store its footage. The moment your drone lands, you can remove the Micro SD memory card from the drone and place it into the Gigastone CR8600 device, which will subsequently be inserted into an iPhone or iPad via its Apple Lightning adapter. With the free Gigastone iOS software, you will be able to review the footage, delete or back it up to the cloud storage or even onto the iPhone or iPad itself. Heck, you might even want to directly upload it to YouTube and other social media channels, who knows?