It may not be the wisest of moves buying other people spy equipment but hey if you’re married to 007 and are stuck for a gift then check these out:

We wrote about this exceptionally cool GPS tracker earlier in the year and it became our first ever Digg front page (which meant lots of traffic and new readers (thank you digg)).

Once the tracker has done it’s travels and it’s back in your possession you simply connect it to you PC and download the data. This data can then be plotted on Google Earth, Mapquest, maps.google.com and Virtual Earth to show exactly where it’s been, how long it took and how it got there.

I just think this is so cool (may of said cool a record number of times in this post) it obviously has the spy functionality of tracking somebody else but to me it is even more useful for tracking your own holidays and backpacking adventures. So not only can you bore visitors with your holiday snaps you can also show them exactly where you went. 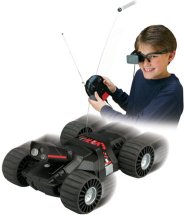 This has got to be the coolest spy toy ever, a remote control car with a built in night vision camera that transmits what it sees back to a pair of LCD glasses.

When I was a kid I used to have a spy cardboard suitcase that contained advanced spy kit stuff like a magnifying glass, fingerprint powder and a Morse code book. I’d of killed for one of these spy cars.

I can imagine this toy getting many a kid brother into trouble, followed by a slap off an older sisters friends.

For £99 you can provide a loved one with a days spy training on their own secret assignment (the movie “The Game” rings a bell here).

If you’ve ever fancied yourself as the next James Bond then our Secret Agent Academy experience is for you! 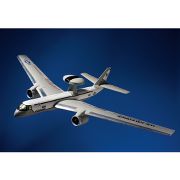 This is another very cool spy present from Hammacher, a digital camera attached to a remote control plane.

Modeled on a modern AWACS jet, this remote control plane has a detachable digital camera that takes still photos from hundreds of feet above the ground, allowing you to document your surroundings in a way previously impossible. The camera records up to 26 high-quality VGA (640 x 480 resolution) photos at the push of a button which can then be easily downloaded to any PC via USB for archiving, sharing, or printing.

You can buy the R/C Spy Plane for $239.95 (if I’d got this present as a kid I’d still believe in Santa, in fact if I got it this year I’d leave him a thumb of my favorite whiskey).

This is a fun gift for those that are paranoid about people sneaking around their stuff, lazer trip wire.

Do you have certain rooms or areas that you wish people would stay out of? Do your children want their privacy and are tired of their brothers and sisters sneaking around in their rooms and in their belongings?

Then this Lazer Trip Wire may be your answer to some peace and quiet. With the lazer trip wire, you or your children will be able to set up an invisible perimeter alarm. The alarm uses three light beams, which can be seen, with the use of the water mister. If anyone touches one of these invisible beams, an alarm will sound. Your children will absolutely love having their own security system and you will be able to tell which child is really disturbing the other ones privacy. Sometimes the tattler may be the culprit.

This is another Think Geek product priced at a reasonable $24.99.

We’ve covered quite a lot of spy gear over the last year, so if any of these gift ideas don’t grab your fancy check out some of the other spy gadgets that we’ve reported on.