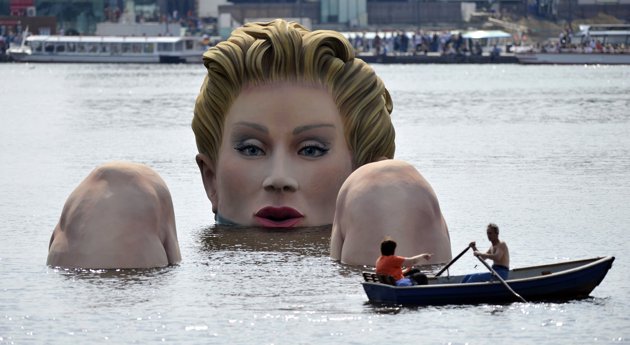 We have seen some interesting giant sculptures before, like those big ones powered by the wind. This one that you see here is created by Oliver Voss on Alster Lake in Hamburg.
According to my Source, it appeared in the lake on August 3, and it rises four meters above the surface of the water. It is not a permanent edition to this body of water, as it will stop being on display until August 12.
This sculpture is called “Badenixe”, which translates to “bathing beauty”. Another name is “Riesen-Nixe”, which translates to “grand mermaid”. Clearly, it doesn’t look like a traditional mermaid, as it apparently does not have a fish tail. Unless this lady has some backwards arms, those two lumps in front of her are legs.
Apparently, this lady has caused quite a controversy since many interpret this lady as being nude. I suppose that you could interpret that from what you see above the waterline, and one might want to question why someone would put a giant skinny dipper in this public attraction.
I’ll let you decide whether this sculpture is worth keeping, and I haven’t heard any plans to extend its swim. There are more pictures of it at my Source, and I’ll also let you decide whether she blends well into the surroundings like the Statue of Liberty.
Source