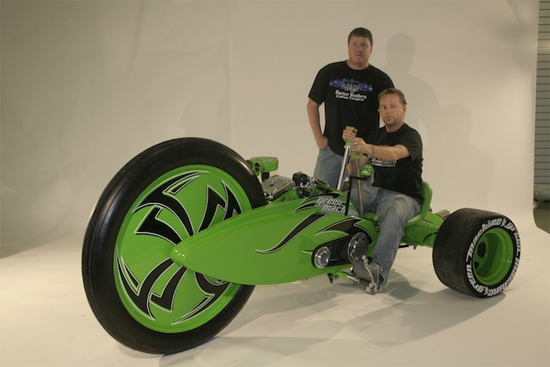 Back in the days when I was riding a Big Wheel, there was the Green Machine. The Green Machine had nothing to do with saving the environment, but it was the Porsche of the Big Wheel cycling trikes with two giant brake levers for some serious spin-outs. At least, that is what the ads showed.
A few guys from Parker Brothers, who have also designed a working Tron Lightcycle, have created this Green Machine Motorcycle trike. It has an 80-inch Harley Davidson Evo engin and is capable of going at speeds of 50 miles per hour. Something tells me I might want to take a class before I get behind the wheel (the big one in front) of this. I have no idea what those controls do, but it reminds me of a Speeder Bike from the Return of the Jedi movie.
I’m not certain why you would want to build this, except for fun. Apparently, Parker Brothers is seeking some sort of approval from the Guinness Book of World Records as the largest wheel on a motorcycle. I am not certain what in the world is the next biggest, or who would try to break this record.
I once heard that our old comedian friend Gallagher created an adult-sized Big Wheel. I’ll bet he would really like this one.
Source