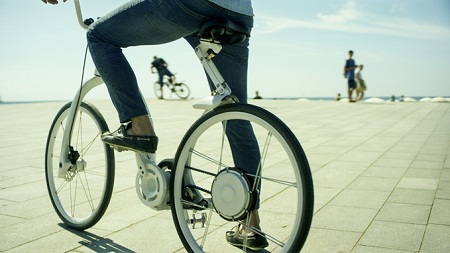 We know what commuter life is all about. Crowded buses, smelly trains, traffic jams, and pedestrians walking slowly towards each other, making it impossible not to acknowledge one another, but not wanting to until you’re close enough to be able to pass without having to keep looking at the other person. Riding a bicycle is a grand idea, but comes with its own set of issues such as where do you put it, how will you make sure you’re seen at all times, and how do you keep yourself looking presentable after pedaling up a storm?

While there are still safety concerns to take into account, the space your bike takes up and the energy it takes to use it are the next biggest factors. If you’re already riding a bike to get everywhere, but are starting to get weary of the commute, then an electric bike could help. Since space is also a factor, the Gi FlyBike seems like the ultimate solution. This is an electric bike that can go up to 40 miles on one charge, and can literally fold in half, taking only one second to fold.

In case a 6,000mAh battery-powered bike that only takes the pull of a lever to fold in half isn’t exciting enough for you, it is capable of much, much more. It uses an app to let you control the Smart-Lights, which are white high-efficiency LEDs, it lets you track your favorite routes and personal fitness stats, and will let you lock the bike, or let a friend borrow it from afar. If your phone is more than ten feet away from the folded bike, it will also lock automatically. It can also charge your smartphone while you’re using it for GPS on its mount in between the two handlebars. The tires are also airless, so there’s no chance of you getting a flat. One of these will cost you anywhere from $1,990-2,290 depending on how quickly you move.

More information and crowdfunding on Kickstarter