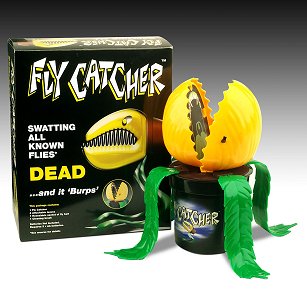 I don’t think there’s anyone that can stand the incessant buzzing of flies, whether we’re trying to sleep or doing any other activity. There’s an assortment of ways of getting rid of them. The most popular is the bug spray: toxic, smelly stuff.
There are also various electric devices, but they all look like boring bluish lamps.

Here’s an electronic device that will add style to the fly killer. It’s an electric version of the Venus Flytrap, the best known carnivorous plant.

Of course, it would have been too boring to just have a snapping plastic plant around, so it’s been heavily personified. Looking like it has teeth and eyes, it seems to rather be a jaw with 4 supporting leaves than a plant.

Down in the ‘mouth’ there’s a bait for the nasty buggers. As they enter the mouth, sensors recognize the best time to snap the jaws closed.

Of course, since it’s been so heavily personified, after ‘eating’ the bug it will release a loud and satisfied ‘burp’. This adds to its ‘fun’ factor.

It runs on 3 (not included) AAA batteries located in its ‘flowerpot’. Of course, there’s extra bait available for purchase.

Here’s the product page, where you’ll also find a cool video of it in action. Thanks to Nerd Approved.