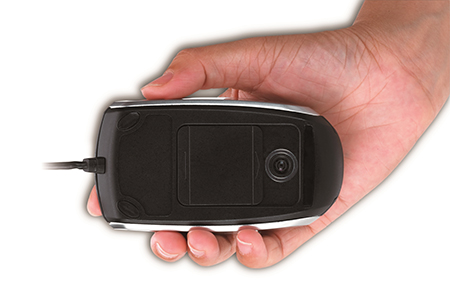 There are certain things in life that just go together. Peanut butter and jelly, Macaroni and cheese, Simon and Garfunkel, the list can go on. Hardware manufacturers know that this is true, and occasionally they’ll step outside the box and start adding in features to their products that go naturally together. This is why cell phones have cameras, newer TV’s can access the internet, and many keyboards have special media keys to control the music and movies on your PC. However, sometimes the pairing of functions doesn’t always make the most sense.

Genius recently announced their All-in-One Mouse & Camera, which, as you can guess from the name, serves as both a mouse, and a digital camera. Though I think that having two functions doesn’t really deserve the title of “all-in-one”, but that’s just me.

The mouse is a pretty standard 1200 DPI pointer with just the two regular buttons, and a scrollwheel. On the camera side of things, you’ve got a 2.0 MP sensor, which can shoot at up to 720p, and a dedicated shutter button. You can switch between modes by sliding the panel on the underside of the mouse to reveal either the mouse sensor, or camera lens. You’ll apparently be able to instantly post the pictures on social media sites, and edit the photos with the included tools. With most people having a decent camera on their phones these days, I don’t see a lot of everyday uses for something like this. Perhaps an office that regularly takes pictures of documents or small objects might find it useful, though. If this is a must-have for you, then you’re looking at a price of $35.