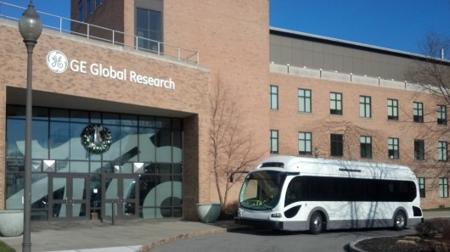 We do seem to be making a move to electric vehicles slowly but surely, as the world catches on with the idea of global warming being a disaster. Hybrid vehicles are enjoying a pretty good sales run at this point in time, although the percentage is far from dominating the auto sales market. Well, having more efficient people movers in large cities are important, and so too, would making sure that these public transportation arteries are run by environmentally friendly vehicles. General Electric intends to answer this clarion call with the Durathon battery that they claim is cheaper to power buses using clean energy.
Basically, the Durathon battery will be used in tandem with a lithium battery and a hydrogen fuel cell, where this combination makes it possible for the vehicle to achieve full performance with a much smaller fuel cell compared to previous attempts. The battery is built upon its predecessors, where previous tests with a dual-battery system on a clean fuel hybrid transit bus, working alongside a high-energy density sodium battery with a high-power lithium battery did the trick. This is somewhat similar to a previous attempt by Harvard scientists to create a fuel cell which can produce and store energy, where the gist of the idea is to merge the power of acceleration that is made possible by lithium batteries, alongside the storage capacity of sodium batteries such as the Durathon, to deliver the best of both worlds.
Since having a decent range is one major concern for electric vehicles, statistics have shown that this should not be a major worry for bus operators, as most of the transit buses that circulate on American roads travel less than 100 miles (160.9 km) each day. With 846,000 buses registered in the US, just pause for a moment and imagine if all of them switched to cleaner, emissions-free energy systems, the total amount of emissions reduced would definitely be a significant amount.
GE claims that next year will see thousands of Durathon batteries shipped from its Energy Storage business in Schenectady, New York, to customers in the telecommunication arena, where markets like Africa, the Middle East and South East Asia will benefit the most. We’re all for green energy, how about you?
Press Release