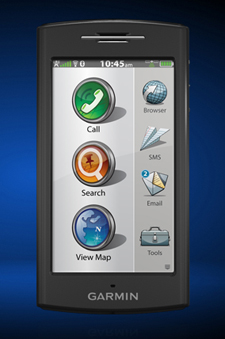 Nowadays, every gadget is trying to be a multi-tasker. Take the iPhone – it’s trying to be a portable computer, a music and video player and a phone (amongst other things). Not to be outdone, Garmin just presented the teeming throng of gadget hounds with the nuvifone, a cellphone that is also a GPS. Here is how nuvifone is being described: “[nuvifone] is the breakthrough product that cell phone and GPS users around the world have been longing for — a single device that does it all” No mention of the fact that there are many other options out there to do that, but I’ll reserve judgment on this device until it gets some use.

The nuvifone doesn’t have many details out yet, but is slated to be released in the 3rd quarter of 2008. Here’s a list of features:

However, it brings up an point of contention when looking at GPS devices: they’re being viewed more and more as one-trick ponies or mono-tasking devices and unless they innovate (and pack in a few more features into the one package), it’s going to be really hard for any GPS maker to survive the ultra-competitive market in the future. Technology is getting smaller and more companies are adopting multiple technologies (including GPS) in their products. That’s just they way the market is.

But just adding cellphone technology to their existing GPS products won’t be enough to guarantee that they’ll be around – it just may already be too late for them. They can put a bandaid on the amputated stump, but that will only last for so long as phones like the iPhone exist and keep innovating well beyond their GPS counterparts.

I guess we’ll see how this irons out.

[Garmin via Gizmodo and Ubergizmo]