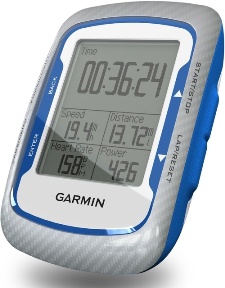 Not content in being number one in satellite navigation for the automobile, Garmin has just announced the Edge 500 for the bicycle.

The Edge 500 is one of those bike consoles that can do quite a lot more than your average bike console. Not only can it track the user’s GPS position, but it also gives the user readouts for velocity, distance, time, elevation, as well as climb and descent. It can also detect temperature, and will even change time zones automatically. Yes, a bike with an Edge 500 on it will call all other bikes wimps.

When connected to the Garmin heart rate monitor, the Edge 500 can detect changes in the user’s heart rate. This information can be used to detect the calories burned on the ride. As for the battery life, it is good for about 18 hours worth of “play-time”.

Apparently, Garmin was inspired by actual Tour De France rider Christian Vande Velde. He suggested a small device with a big screen, easy-to-use buttons, and a sturdier mount, “and Garmin listened”. By the way, Vande Velde is a member of Team Garmin’s bike team, so I really hope that they always listen to him.