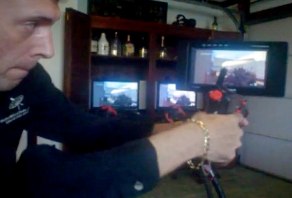 Those of you that love the FPS shooter games will fall even more in love with them with the Wireless Game Gun. As you can see by the You Tube video after the jump, someone has finally perfected a way of putting a screen on a motion controlled controller that resembles a military machine gun.

That someone is an engineer and inventor who is known all across the tech and gadget blogosphere as The Redneck Techie. The video shows him moving around the room and stalking in some “classic Tom Clancy” style with this unique gaming peripheral.

You will notice the cord that dangles from the gun and ends up in his pocket. That is apparently the batteries for the unit, which “were too big to fit into the gun”. Perhaps version 2.0 will not have this wire and really be wireless, but I don’t see it being any more annoying than the Wii-strap.

The Wireless Game Gun is Plug-and-Play compatible with Xbox 360, Wii, PS3, and the PC, and maybe even for Macs. You can look into pre-ordering it here, but you might notice that the site looks a little antiquated. It is projected that the Wireless Game Gun will be available by Christmas, but there is no word on price as yet.