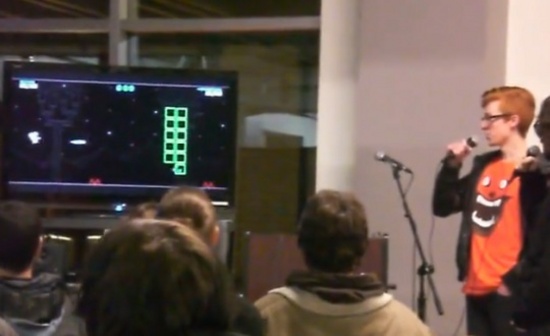 I usually don’t report on video games here on Coolest Gadgets, unless there is something that sets them apart from the norm like Kung Fu Live.
I believe that I have found the perfect example of “something different” with PewPewPewPewPewPewPewPewPew. This is the actual name of the game, and you can see in the video after the jump of why it is called that. You can also see that the title of the game didn’t fit.
This game with the long name is an Xbox Live Indie game that uses two ordinary Rock Band microphones or Xbox 360 headsets. One player makes the “pffft” sounds on a jetpack to make the guy in the game rise, and the other character makes the Pew-pew sounds for shooting obstacles in the path.
I’m guessing that the guy who does the jetpack noise will probably run out of breath first. Then again, the guy who is blasting might tire out when the levels get tougher, I would imagine. I wonder if there is a way for creating this game for solo play so two people don’t have to play every time.
The game was developed for Global Game Jam 2011, and I can imagine that it will be a hit for anyone with two microphones or headsets.