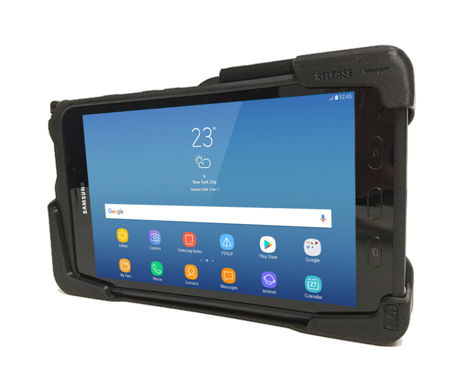 When it comes to tablets, the general trend of this particular device has been on a downward spiral for quite some time already, but there is still a decent enough sized market to keep new models rolling out from time to time. It is useful for such tablets to feature a dock, since there are times when you simply want to stop working and relax, and watching a movie on a tablet is far more enjoyable than on a (relatively) tiny smartphone display. A docking station would then come in handy, and for Samsung Galaxy Tab Active2 owners, Gamber-Johnson has come up with not one or two, but a trio of docking stations that have been specially designed in order to safely and securely mount the all new tablet.

These docking stations will also play nice with the other Gamber-Johnson range of mounting equipment, and are well known to specifically work in vehicles like police cars, ambulances, OTR trucks, utility trucks, and forklifts. The new collection of products will continue to underline support by the company for its Android initiative, ensuring affordable accessory solutions when it comes to rugged Android tablets. Niche market segments like transportation and logistics that tend to require more rugged devices compared to traditional commercial products will definitely benefit from this.

Three different versions are available for this docking system version: a lightweight and low-cost cradle, a fully loaded docking station with a USB port to power your keyboard or mouse, and a kit version that will also be able to replace your tablet’s battery. The Gamber-Johnson cradle version helps to keep things nice and simple, tipping the scales at a mere 0.46 lbs, it will let you access all the features while keeping the Tab Active2 safe.

While no pricing has been announced, all three will be available soon, having passed Gamber-Johnson’s extensive rugged environment standard, undergoing cycle testing for 30,000 times before being released to ensure the utmost level of quality.