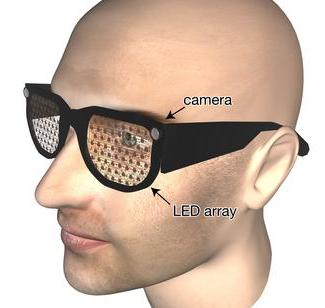 In the future, our glasses could help us see better in a different way. I’m talking about using some electronic technology on the glasses.
Some Oxford researchers are working on some frames that have cameras mounted on the edges, along with lenses studded with lights. This allows the users with macular degeneration to see a simplified version of their surroundings. They also have some other interesting features like face detection, tracking software, position detectors, and depth sensors.
If you think this is cool, I found another concept set of eyeglasses that can do yet even more. This one is under development by Rosalind Picard of MIT and Rana el Kaliouby at the University of Cambridge, and their glasses have a tiny camera as well. The difference is that this camera has a tiny computer that will “read” someone’s expressions. It will even tell if someone is responding negatively or positively by a flash of a green or red light that only the user can see.
Yes sir, it would appear that eyeglasses are about to becomes smarter than smartphones. I can’t help but think that we are delving into unnatural territory on a Borg scale with something like this. However, these eyeglasses are both concepts for now, so we’ll let the future deal with it.
Source 1 and Source 2