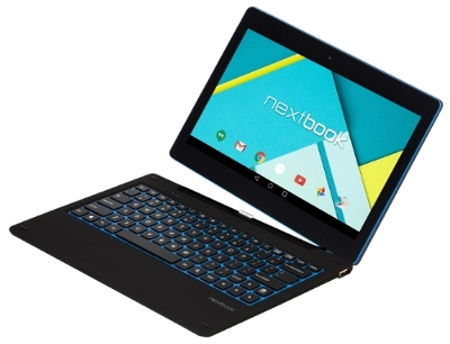 It was just yesterday that we brought you word on how E FUN actually revealed a quartet of upcoming tablets under the Nextbook umbrella, and being the fifth largest tablet supplier in the U.S., it seems that the company has taken the necessary steps to announce the availability of its very first Android 2-in-1 device, which will be known as the Nextbook Ares 11. Somehow, the name Ares resonates with me, as I am a huge fan of the God of War series, and the Nextbook Ares 11 sure is a “fighter” of a device, especially when you take into account that this 11.6″ tablet will come with a detachable keyboard.

Sure, the Nextbook Ares 11 will be larger compared to a regular tablet, but on the other hand, it happens to be smaller than a laptop, which is a good thing, especially when you need to get work done while traveling and do not want to tote around something that is heavy. In fact, this particularly versatile 2-in-1 device is said to bring the best of both worlds together into one, where folks who are looking for entertainment would fall in love with its portability and multitude of apps, whereas it’s ease of use will prove convenient for work.

The Nextbook Ares 11 can be picked up from Walmart stores as well as Walmart.com for $197 a pop if you are interested. Hardware specifications include a detachable backlit keyboard, where it will come with Android 5.0 Lollipop with Google Play, a pair of standard 2.0 USB ports (would have been nice to see USB 3.0 thrown into the mix of course), a 1366 x 768 IPS capacitive touch screen display, a quad-core Intel Atom Z3735F Processor (X86, 1.8GHz), 1GB DDR3L system memory, 64GB of onboard storage memory that can be further expanded by another 64GB thanks to the microSD memory card slot, Bluetooth 4.0 and WiFi 802.11 b/g/n connectivity, 2.0 megapixel front and rear cameras, miniHDMI and microUSB ports, and a 9,000mAh internal rechargeable battery that will help to keep it running with minimum fuss.