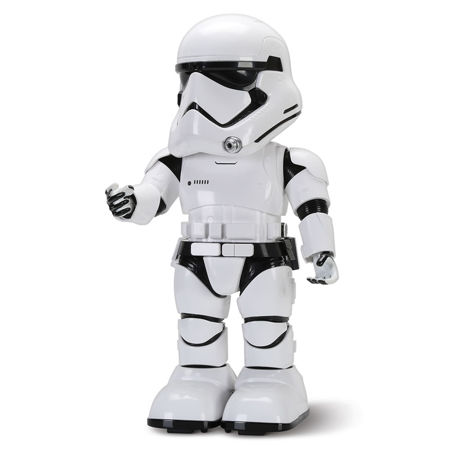 When it comes to the Star Wars franchise, one thing stands out for sure: the legion of its fanbase continues to grow at an unabated rate, and with Disney taking over the entire franchise, you can be sure that more money-spinning blockbusters are going to come your way, even though many of the older fans might see these new films to be nothing more than a way to milk more cash from moviegoers. Apart from the movies alone, merchandise plays a very important role in the Star Wars universe, with thousands upon thousands of products released throughout its history. If you think that you would like to own a $229.95 Fully Obedient Stormtrooper, then do check out what Hammacher has to offer.

Stormtroopers started off as clones as told in The Clone Wars, but over the years, it has evolved to conscripting regular folks from the far reaches of the galaxy in order to fight for the galactic empire. As with any self-respecting army would do, discipline is said to be of the highest order, which is why Stormtroopers continue to be one of the best fighting units that are subservient to their superiors, even unto death. See just how true this is with The Fully Obedient Stormtrooper, where this robotic entity loyally obeys commands as if issued by an Imperial general or a captain of the First Order.

By making use of a free smartphone app, it is able to navigate a path, patrol an area, as well as follow custom directions. Not only that, the integration of facial recognition technology allows it to identify comrades and rebels, and it is also more than capable of issuing verbal warnings while responding to commands via an integrated speaker. The built-in camera on its helmet offers a first-person viewing perspective on your smartphone, and infrared sensors allow it to detect stairs as well as furniture edges. All that it takes is an hour of charging and it is good to run for a couple of hours. The Fully Obedient Stormtrooper plays nice with smartphones that run on iOS 9.0 and above and Android 6.0 and above.