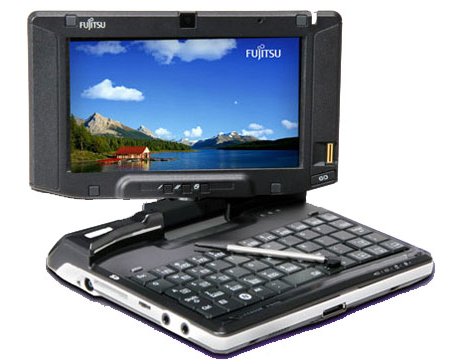 Fujitsu Computer Systems recently announced that it will sell the LifeBook U810 mini convertible computer for $999 when it hits store shelves sometime next month. Weighing a mere 1.56lb, you definitely won’t find it a hassle to carry it around on your business dealings. The Fujitsu LifeBook U810 holds the distinction of being the first tablet of its kind that comes with touchscreen capability and the ability to convert from a clamshell form factor to that of a UMPC size in a flash. Other competitors in this market include the OQO Model 2 and the FlipStart by Vulcan Portals, but Fujitsu clearly thinks that its offering is the best of the three (which company doesn’t?).

The U810 definitely does not fall short when it comes to features, bringing a QWERTY keyboard into play whenever the clamshell design is opened. The touchscreen accepts input from a stylus, but if you can’t be bothered to tote it around or have already lost yours, there is always the good ol’ standby – your finger. Should you want to transform the U810 into a tablet, just twist around the 5.6″ touchscreen LCD display and let it lie back on the keyboard. You have a choice of three different operating systems – Windows Vista Business, Windows Vista Home Premium or Windows XP Tablet PC Edition 2005. The U810 is more than capable of handling standard notebook applications without missing a beat.

The 4 cell lithium ion battery offers up to 5 hours of computing time, but in real life the number is expected to be much less. 1GB of RAM has been thrown in for all your programs, so you might think twice about picking up Windows Vista as the operating system of choice since Vista requires at least 2GB of RAM to run smoothly with all the bells and whistles turned on. 40GB of storage space is also included into the package, so you’ll have to pick up an external hard drive if you plan on carrying lots and lots of huge files such as video and 3D work. Will the U810 with its touchscreen capability and Windows Vista OS improve the adoption rate of tablet computers? Only time will tell, but I’m not too optimistic either.