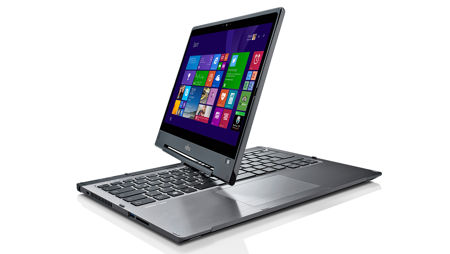 When it comes to notebooks, you know for sure that the notebook landscape is very different today compared to what it was all those years ago. This time around, we have options that allow us to be equally productive even when the device does not come in the form of a traditional notebook. For instance, there are tablets with a keyboard case cover which would turn it into a full fledged notebook when connected, or a convertible notebook that can double up as a(n extremely heavy) tablet as and when the need arises. Having said that, here we are with the new Fujitsu Lifebook T936 and Lifebook T726 2-in-1 convertibles.

These two models are said to be the next generation of all-in-one tablets that hail from the Japanese company, sporting screens which can be rotated a whopping 180° in either direction. This particular feature would enable multiple ways to operate the devices so that it can suit a wide range of usage requirements. Regardless of which particular model that you pick, either one will come with a robust bi-directional display hinge and multi-method input (pen, touch, keyboard) allows users to customize their work style. Connectivity options would include optional 4G/LTE WLAN, so that you can remain connected regardless of where you are.

They also boast of chemically strengthened glass and a magnesium alloy cover, as both of them have been tested against military standards, delivering a high level of protection from damage in the event of bumps and drops. An anti-microbial and spill-resistant keyboard has also been thrown into the mix just in case you are using it in unpredictable environments such as schools or hospitals.

Your eyes will also appreciate the 13.3″ display with dual digitizer for pen and touch input, while extended battery life lets you work beyond your normal working hours as and when required. Expect both of these models to be available already for purchase if you are interested in picking either one up.