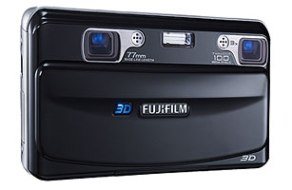 Considering the number of 3D movies in the theaters this summer, as well as those coming this holiday, one can’t help wonder if we are entering into a 3D era that will not end as abruptly as it did in the fifties.

Fujifilm has now announced that they are putting out a camera that can take 3D images. At first I thought that this was a camera that could produce prints that would be 3D, with certain glasses, but apparently, I was wrong.

According to my source, “to view the 3D images, users can put them on a special 3D enabled digital photo frame or print them with a special 3D printing process that needs no glasses to view”.

It can accomplish this wondrous feat using dual lenses that are spaced out just like human eyes. This technology is not cheap, as this 10 Megapixel camera is priced at $600. The digital photo frame for this camera is about $200.

Here’s the real kicker. These three-dimensional prints are at a record $5 each. That’s probably too expensive for the average consumer, but if someone wants a 3-D pic of themselves, this Fujifilm camera could be good as a carnival gag or something.

As I recall, I remember seeing a TV ad in the eighties that featured a camera that could take 3-D images. I don’t remember the company that made it, but it clearly did not catch on. Then again, I seem to remember a barrage of 3D movies back in the early eighties, and that fad quickly died.