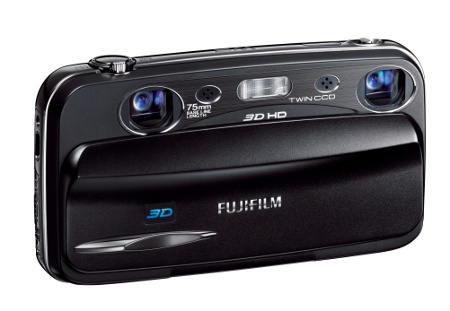 Stereoscopic 3D is big business these days, and Fujifilm intends to milk this potential cash cow to the maximum with the FinePix REAL 3D W3 digital camera. As its name suggests, this model will go one up on its predecessor by being able to capture high-resolution 3D photos and movies in 3D HD at 720p, and this is made possible thanks to the new RP (Real Photo) Processor. Apart from that, it also comes with a new Mini HDMI port that lets you play back your recorded images and video on most 3D television systems – apart from its Autostereoscopic 3D Widescreen 3.5” LCD display, of course. It makes us wonder with all these 3D devices going around, would bridal studios start to offer 3D footage and 3D images for their clients?

The slim FinePix REAL 3D W3 digital camera will sport a black matte finish in an ergonomic design, measuring just 21mm at its thinnest point while tipping the scales at just 8.5 ounces with a battery and memory card stashed within. With its durable stainless steel material used in its construction, you can be sure that the optical axis within remains precisely balanced to deliver accurate 3D images. Not only that, the W3 will also feature a horizontal lens cover with wave detail that doubles up as an on/off switch.

The introduction of Fujifilm’s FinePix REAL 3D technology enables one to capture true 3D courtesy of its twin 10-megapixel CCD sensors alongside dual FUJINON 3x optical zoom lenses (35-105mm) which are spaced 75mm apart. Both 3D and 2D Auto functions enable just about anyone to capture high-definition, high-resolution movies and photos without breaking a sweat, while audio is preserved in stereo for more impact. The One Touch Movie Mode lets you switch between movie and still modes, letting you play with the subject matter at your whim and fancy. Expect to see the FinePix REAL 3D W3 digital camera hit the market sometime early next month for $499.95.