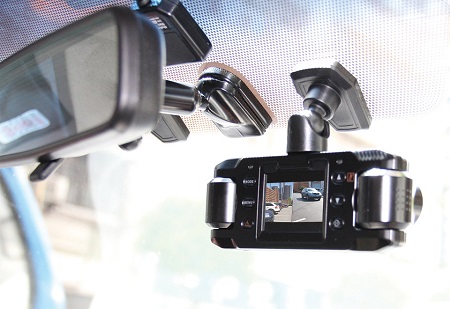 When you’re driving in your car, the last thing you ever want is to get in a wreck. Good, defensive driving helps avoid collisions, but sometimes things are completely out of your hands. In those cases, it’s good to have a recording of what happened, in case there is a dispute over the fault of the accident. Dash cams have become increasingly popular in the last few years, but they really only capture one point of view. If you’re hit from the rear, that’s not going to be seen. What you need is a cam that can look both directions.

As its name implies, this Front and Rear Recording Dash Cam is going to record more than one perspective. It doesn’t actually have to only face front and rear, though. The unit features two separate lenses, which can each be rotated 180 degrees. If you want, you could have one facing out each side window, or any combination, really. There’s even a display on the front to show you what’s being recorded, so that you know you’ve got the cameras angled just the way you want.

The camera will need to stay plugged into your cigarette lighter to stay powered up, and it comes with a 4GB microSD memory card, which will keep about 2 hours worth of footage. It will accept cards up to 32GB in size, for up to 16 hours of recording. If you want one of these for your car, you’ll be looking at spending around $200.