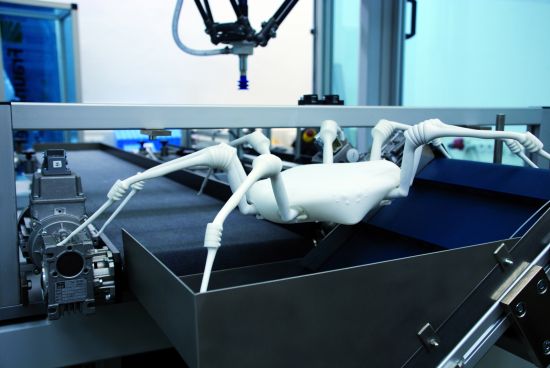 We have reported on robots that can search through rubble before, such as the Omnitread. Generally, these types of robots are snake-shaped so they can fit into narrow crevices.
This robot from the Frauenhofer Institute in Germany is arachnid in shape, but it is essentially the same thing. These eight legs are all on hydraulics, and four of its legs on the ground at the same time.
As for the body of this robot, it has many sensors, including radiation monitors in case it has to go into irradiated zones. It also has video cameras so it can find what is really important: survivors.
I am not sure how big these robots are, but they can apparently be reproduced quite easily on a 3D printer. Sure, not all of us have 3D printers, but give it time. Maybe we are looking at a future where these white spiders will be crawling around. Just try to see it as a good thing and get rid of your Minority Report dystopian visions.
For some reason, I get this vision out of my head. Can you imagine being trapped under rubble, and then all of a sudden, these spiders come creeping through the cracks? Man, as if I wasn’t already freaked out.
Source