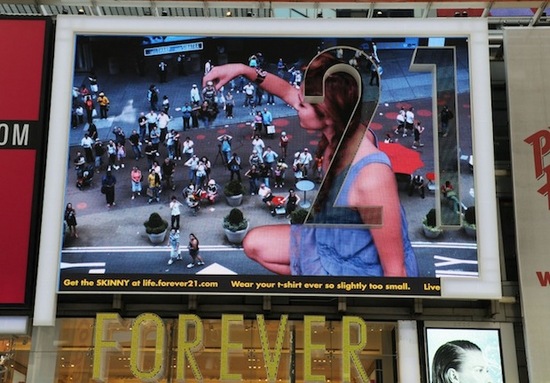 Some of you might remember when we reported on this billboard in the Netherlands that used augmented reality to make it look like the bystanders were in the scene being displayed.

This is another billboard that uses augmented reality, and it is located in New York City’s famous Times Square. This one takes the augmented reality one step further as it can interact with the crowd.

Apparently, Forever 21 wanted to make a very memorable impression on the viewer by having this giant model take pictures of the crowd, and then have it develop into a realtime picture. She can also pluck people from the crowd, put them under her hat, put them in her purse, or she might just flick them away. I have a video after the jump.

You will notice all the tourists around this billboard taking pictures with their cell phone cameras. I am assuming that this the idea. After all, you can see in this video here that Times Square is flooded with video screens, billboards, and other assorted neon. That Forever 21 billboard/video screen sure stands out. I must admit that I never heard of Forever 21 now, but that billboard has certainly made a good impression.

That leaves the score of advertisers: one, and consumer, stunned.

Times Square Billboard by Space150 from Cliff Kuang on Vimeo.