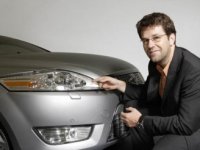 Ford has successfully developed its very own Adaptive Front Lighting System (AFS) and has moved to incorporate this innovative piece of engineering into its new Mondeo model, allowing the vehicle to beam light around corners that could potentially alert the driver of upcoming obstacles which could not normally be seen from other standard headlamp equipped vehicles. The AFS system claims to improve visibility while negotiating tight bends courtesy of its halogen lamps that are linked to sensors which are smart enough to detect steering input, swiveling these lamps up to 15 degrees when required. Sounds like a pretty nifty feature to have in your vehicle while you are driving through curvaceous (and treacherous) roads that have nothing but your headlamps (and a little moonlight if you’re lucky) to guide you.

Not only does it help you reach your destination safer, the AFS system also makes it easier to see pedestrians, animals and other objects whenever you enter a bend, while reducing glare for oncoming drivers. To date, comparative tests between conventional halogen reflector lamps and AFS have shown that the latter actually casts an additional 10 meters of light into the bend, and when allied to static corner lighting, AFS greatly improves visibility.

The AFS system’s brains do not stop there, as it comes with static, low level cornering lights that will turn on automatically whenever the vehicle travels below 37mph (why that odd number, I’m not too sure. Probably some sort of research has been done to arrive at that figure), while the steering wheel must turn at an angle of at least 30 degrees. Sounds like a pretty nifty feature to have when you’re trying to avoid accidents in reduced visibility, being particularly useful when involved in tight maneuvers such as turning into driveways. If you’re interested, the new Ford Mondeo can also be equipped with Bi-Xenon lamps that come with static cornering lights, including automatic headlamp leveling and washer jets.