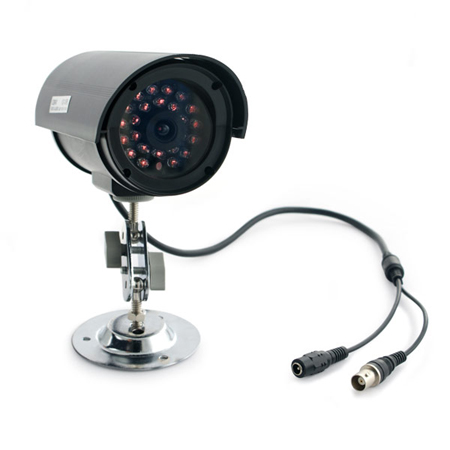 If you own a small business or just have a lot of valuables in your home, you’ve probably considered purchasing a couple of security cameras. Unfortunately such things cost money, and thus aren’t always an option. If you’re only mildly concerned that people are going to try and break into your place, why not get a couple of dummy cameras instead?

Sure, you don’t have the comfort of knowing that you’ll catch thieves on tape should they break into your house or business, but that’s not really the point of having a fake camera. There’s a good chance that if the dummy cam is placed in a very conspicuous area and looks good enough, anyone looking to break in would just move along to the next house.

This Dummy IR LED Bullet Camera certainly looks real enough to make just about anyone think they’re being watched. They’ve added in LEDs which are activated by a photocell, which would be enough for me to believe it’s real. The cameras are far cheaper than the real things at $34.99. Then again if someone figures out your ruse, you’ll wish you had gotten live cameras.