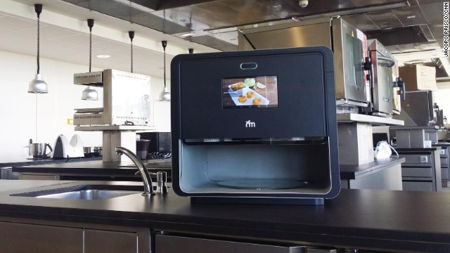 I must say, the Foodini machine is one particular device that blurs the line between fantasy and reality. Remember Star Trek replicator, which is capable of churning out just about anything that you are able to think of? Well, the Foodini can be said to be the real world precursor to that wonderful device, where it might even help solve those late night snack cravings on your behalf. Natural Machines is the company behind the Foodini, and based on the name of the hardware itself, you can more or less second guess that this is a 3D printer for food.

The Foodini will not be radically different from that of a regular 3D printer, but as opposed to printing out everyday items with a special kind of plastic, the Foodini will deploy edible ingredients that have been squeezed out of stainless steel capsules:

Lynette Kucsma, co-founder of Natural Machines, shared, “It’s the same technology but with plastics there’s just one melting point, whereas with food it’s different temperatures, consistencies and textures. Also, gravity works a little bit against us, as food doesn’t hold the shape as well as plastic.”

Natural Machines is a startup based in Barcelona, Spain, and claims that the Foodini happens to be the only one of its kind that can print out a wide range of dishes, ranging from sweet to savory. In other words, this is a mini food manufacturing plant that has been shrunk down to the size of an oven. I do wonder just how nutritious would be the “food” that is printed out be, although one might be hard pressed to tell the difference between the real deal whipped up in the kitchen, as opposed to what the Foodini churns out by itself, if the presentation is done right, of course.

Just how much will the Foodini cost if you would want one under your wings? We are looking at a recommended retail price of $1,000 thereabouts.