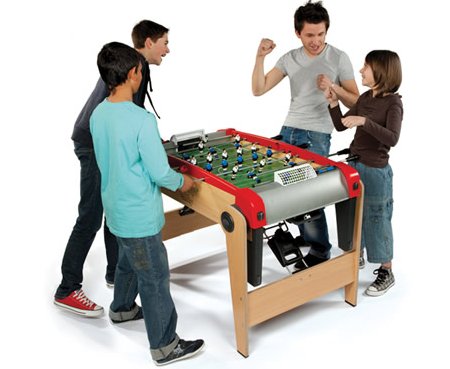 You know something? There is nothing quite like chilling the weekend away with the rest of the guys over a few drinks, while indulging in traditional pub games like pool, darts and some foosball. For those who have a greater love for foosball than the other two mentioned games, how about picking up this $399.95 Foldaway Foosball Table from Hammacher?
It is by no means a gimped piece of furniture, as it is a full-sized foosball table which can be folded away to just 12″ deep while standing on its end when you are done with it for some upright storage goodness. Made out of solid birch that was harvested near Le Jura, France, it will be accompanied by durable plastic trim. The table’s two-leg pairs each unlock and fold inward while a built-in stand enables easy storage in a closet. Capable of accommodating two or four players, the Foldaway Foosball Table will feature eight metal control rods that glide easily in their slots for fluid movement and rapid wrist action. It has a laminated playing surface that has been bounded by beveled sides which rebound either the included plastic or cork ball (for silent play).