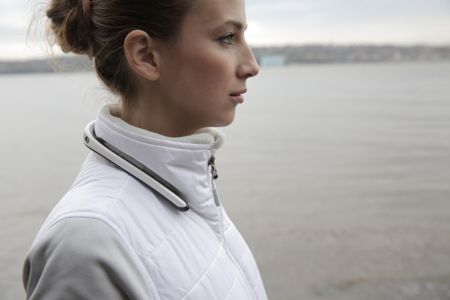 We do know how a camcorder has more or less gotten out of vogue for one very simple reason: our smartphones are able to do a far better job when it comes to recording video at impromptu moments, and it is a whole lot more convenient to lug around compared to a full fledged camcorder. Of course, camcorder sizes have shrunk over the years, but this does not mean that it is still easy to tote up and about. Samsung decided to take things one step further through the idea of the FITT360, which is a 360-degree wearable camcorder that will arrive in the market through Kickstarter.

If you are one who would loves to record just about everything that you see each day, then you would not go too wrong with the FITT360. After all, this wearable camcorder can be comfortably worn around the neck all day long, sporting an extremely light and portable design. Not only that, it has been ergonomically designed to fit virtually everybody while ensuring that it remains unobtrusive with its sleek neckband form. We love the fact that the FITT360 happens to be tough in its development, being rain-, snow-, heat-, and shockproof so as to endure whatever the user puts it through.

Featuring patented image stabilization, live stitching and streaming functionality, the FITT360 is able to open up various possibilities when it comes to tele-presence and life streaming scenarios. Having life logging in mind, the built-in GPS will allow users to keep their personal 360 video-logs within the companion mobile application. With said companion mobile application. FITT360 users can then preview and share videos via SNS in real-time, letting anyone know what you are doing right there and then.

With a trio of Full HD 1080p cameras that deliver 4K resolution images while capturing 360-degree surroundings in true First-Person-View, the FITT360 is certainly worth checking out as it is so easy to use. A full battery charge offers up to 90 minutes of video recording capability. What are you waiting for?