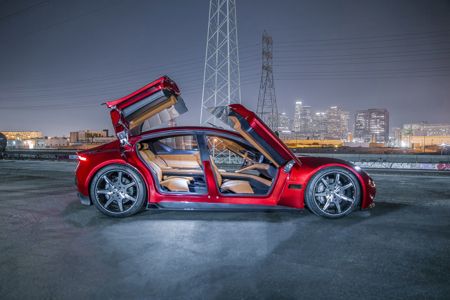 An electric car is not something that all of us are able to afford, although some of us do dream of driving up in a Tesla that offers exceptional acceleration performance with looks that could kill. However, if there is one thing about electric cars that continue to invoke doubt in motorheads, it would be the battery life. Most electric vehicles have to “suffer” from limited range and long charging times (relatively speaking) as opposed to a petrol or diesel-powered ride. Fisker would like to turn such conceptions upside down with their modern day marvel, the EMotion that will be powered by the patent-pending Fisker Flexible Solid-State Battery.
What makes the Fisker EMotion so special? Well, apart from its stunning looks and performance capabilities, it will run on the Fisker Flexible solid-state battery that is capable of delivering 2.5 times the energy density of lithium-ion batteries, hence allowing it to achieve a maximum range of up to 400 miles on a full charge. Even better yet is the fact that it can take less than a minute to power up the battery, making it faster to “fuel up” so to speak compared to the traditional petrol-powered ride.

With an estimated top speed of 161 mph, the Fisker EMotion is no slouch, and this all-wheel drive with 24″ low rolling resistant Pirelli tires is set to blaze new trails. We love the fact that this is a level 4 autonomous driving vehicle, and it is also smart enough to have the doors open and close through a smartphone. On the outside, there are unmovable flush touch handles which will be illuminated, making it more advanced that seemingly standard issue keyless entry models.

For passenger comfort, there are inductive charging ports and special holders for up to a quartet of smartphones to keep up with the times, and to cap it all off, it has four individual, electric adjustable seats that will wrap passengers in ultra soft leather. Hopefully we can see this roll out sooner rather than later, and will keep a keen eye open for the price.