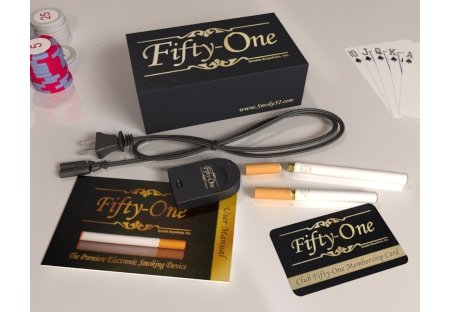 Electronic cigarettes are nothing new, but that doesn’t mean new technology cannot be introduced into the genre to help those who want to cut down on their puffing or even quit the habit altogether. Fifty-One has released its latest electronic cigarette that could possibly help you kick the habit, assuming you’ve already tried other models in the market to no avail. What makes this version different from the rest is the ability to choose from a wide range of flavors and nicotine levels, letting you slowly but surely cut down on your daily fix until you feel that you are no longer nicotine-dependent. Let’s read more about Fifty-One’s electronic cigarette right after the jump.

For starters, the Fifty-One electronic cigarette looks and feels like the real thing, making it comfortable to use with long time and new smokers alike. It comes in two components – the first is a rechargeable battery while the other is a disposable cartridge, and inside the latter you will find the nicotine pad and atomizing mechanism. Once the disposable cartridge has outlived its usefulness, all it takes is a simple screw off action and putting on the new and you’re good to go. A major benefit of this mechanism is the atomizer is never reused, so you don’t have to worry yourself even more with other problems including nicotine residue, build-up and clogging. Users will users draw in a “vapor” that is dense enough even to be noticeable when exhaled, although it isn’t classified as smoke, making this useable even in non-smoking areas.

On the bright side, you also won’t need to fork out for tobacco excise taxes and health-impact fees when you pick up the Fifty-One electronic cigarette, and there is no risk of burning anything since no fire is involved. The starter kit will come with a couple of nicotine cartridges (available in various strengths: 8 mg., 6 mg., 4 mg. and 0 mg.), where you can choose from tobacco, menthol, chocolate, vanilla and coffee flavors.