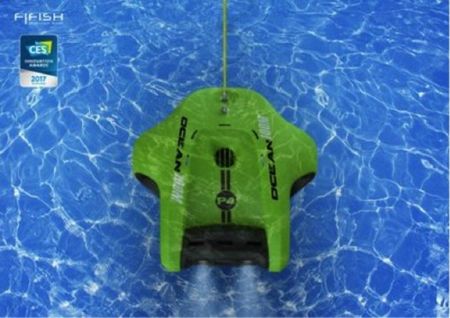 Drones are dime a dozen in the market these days, and there is one common denominator that binds all of them together — all of these drones would take to the skies, regardless of the kind of form factor in which they arrive in. Well, perhaps things in the drone market are going to change in time to come, especially when you take into consideration the effort by Qiyuan Technology’s FiFish. The FiFish is an underwater drone that clearly relishes the task of capturing whatever it “sees” while underwater.

The FiFish has been touted to be the first attempt to bring together both military and industrial underwater drone where the consumer market is concerned. It also hopes to be able to come up with a new market demand which might just spur a whole new industry in the drone segment. The FiFish will make use of core technologies and algorithms, which will include state of art component design, a robot operating system, a video/data collection system, a cloud processing and terminal application.

Equipped with an underwater propeller system that will be accompanied by a camera and lighting system, control system, underwater communication system and real-time feedback system, the FiFish has the ability to stream real-time high resolution video whenever it remains under water. There is no word on pricing or availability as at press time, but it would certainly be a novel drone to have around if you would like to see things from a different perspective.

It would be interesting to see how the other drone players would react to the idea of an underwater drone. While the places where an underwater drone is able to ply its trade is rather limited, the kind of video footage that you are able to obtain with it will surely be well worth the effort in terms of cost and going through the learning curve.