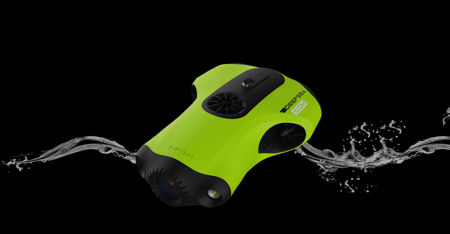 Most of us would think of drones as something that ends up as a luxury purchase of sorts. It is not really necessary, but it is still nice to own one. After all, snapping a sweeping, panoramic shot of a particular area from the skies always evokes a majestic feeling in the viewer if it is done right. The free flying drones in the air have certainly made their mark in the world of consumer electronics, where the market has already matured. However, there is a new way to explore the world around us, and this can be done through underwater drones. Shenzhen QYSEA Technology Co., Ltd. happens to be a leading underwater drone provider and they have recently revealed the flagship FIFISH P3 underwater drone.

Just how does the FIFISH P3 perform the moment it dives into the water? Well, Shenzen QYSEA would like to claim that it carries an amazing performance, making each underwater exploration journey a special one whether you are going to snap photos or capture videos of the situation. Left in the capable hands of an expert, the results yielded will truly be outstanding on a professional level.

The FIFISH P3 is powered by an Ambarella chipset, accompanied by a 1-Inch SONY CMOS sensor and a 162 degree FOV ultra-wide angle lens. This kind of combination is potent enough to let the FIFISH P3 capture 4K HD footage as well as 20MP photos while underwater. Not only that, there are also 4,000 lumens LED lights that boast of 8 adjustable levels of brightness, virtually guaranteeing that the user is able to capture far more detail even in dark environments. The FIFISH P3 is also touted to deliver true-color imaging with stability and reliability no matter how poor the existing ocean conditions are.

Users can also watch whatever the FIFISH P3 is looking at in real-time through a corresponding app, all at the touch of a button where those stunning underwater moments will be broadcasted to a variety of social media platforms including Facebook, Youtube, Instagram, WeChat. Sounds like a dream purchase, doesn’t it?