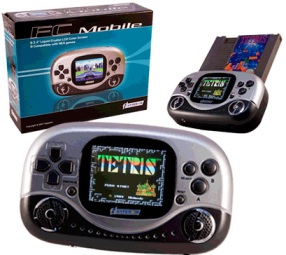 Last week, I covered a story about someone who put an entire Nintendo Entertainment System inside of a Super Mario Brothers cartridge. I would like to take the next logical step on NES emulator reporting, and discuss the FC Mobile, an NES emulator that is completely portable.

For a portable gaming system, the FC Mobile is one thick mobile device. After all, the Playstation Portable (PSP) and Nintendo DS are about half the size of the FC Mobile, and they both play games that are way more advanced than anything the NES ever put out. Considering the size of the NES cartridges that the FC Mobile plays, I suppose that it had to be this thick.

The larger size does give it a screen size advantage of 2.4 inches. If a user wants to play their 8-bit games on a bigger screen, he or she has the option of plugging the FC Mobile into the television with an AV cable.

As for the power, the FC Mobile is powered by 3 AA batteries. It comes in red, white, silver, or black for about $30 to $60. It appears that the only place they are available at is Ebay. I have no idea if there are any plans to get the FC Mobile to a broader, non-online auction market.