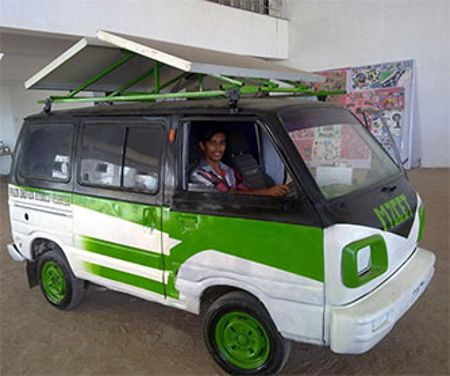 Driving a car has become second nature to many of us, and sometimes, it tends up as a reflex action that we do not pay too much attention to – which is a good thing most of the time, although there are moments when we take this particular moment for granted and start to focus on doing another thing such as checking out our e-mail, only to realize that we might have stepped on the brake a little too late shortly after, resulting in a fender bender afterwards. Well, I guess this is why a driverless car makes plenty of sense, although I am quite sure that it could prove rather disconcerting to some that you do not have full control over the vehicle in which you are traveling in. How about driving a car with your thoughts alone? Don’t you think that this would be cool beyond words?

This is what a bunch of engineering students over in India are working on. At Mount Zion College of Engineering and Technology, this particular project would involve converting a small van into a computer controlled vehicle, where the Emotiv EEG headset would function as a controller. We are talking about using off-the-shelf parts here, people, in order to get the job done – now how about that?

Of course, there are still plenty of questions which are left unanswered as at press time, as this particular concept would take years of refinement for it to become safe enough to drive. The thing is, how are we to know that our brain is able to tell the difference between switching gears and turning left while we are pre-occupied with the goings on at the office? What do you think of this proposition – does it sit down well with you? Do you think this is a better idea than a self-driving car?