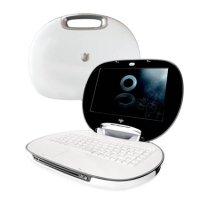 So Christmas is just a month away, and you’re running out of ideas on what to get the love of your life. If the lady you’re married to or courting right now is a big technology freak, perhaps the Tulip Ego notebook from the Netherlands is your cup of tea. The least expensive of the lot is the Tulip notebook that is shaped like a handbag and is available in just one color – iPod white. It will retail for approximately $5,000 at Barney stores in New York, Beverly Hills, Chicago, and Dallas from next week onwards. The Tulip Ego does not use any of those cheap plastic which you find in exploding notebooks, but it uses interchangeable “skins” instead that are available in a wide array of designer fabrics, colors, and finishes.

This hedonistic notebook is no workhorse by any means – it is more of a work of art than anything else. Underneath the aesthetically pleasing exterior lies a disappointing single-core AMD Turion processor with ATI’s Radeon Xpress 200M chipset, Bluetooth 2.0 and WiFi connectivity, and a front-loading optical drive. The display is a 12.1″ WXGA widescreen LCD which should be sufficient for normal use. You can use the DVD player to watch movies on the go without booting up the Tulip Ego.

The main star would be the limited edition Platinum, Diamond, and Otazu Ego Diamond models. Those come with prices so high, your arm, leg, and kidney won’t even be able to raise enough dough to purchase one. These premium models were designed by Laurent de Beer with diamond inlays, while the Otazu Ego Diamond sports a whooping 470 flawless diamonds which are arranged in different tulip, heart, and Otazu designs. Ego even allows you to throw in a customized phrase for kicks, which is the least they could do after you coughed up $350,000 for it. I wonder if the Otazu notebook could take the place of an engagement ring – it has, after all, 470 flawless diamonds that dot its external case. That’s probably more shiny rocks than most monarchs wear over their heads. You can stop drooling now and get back to your mundane lives.