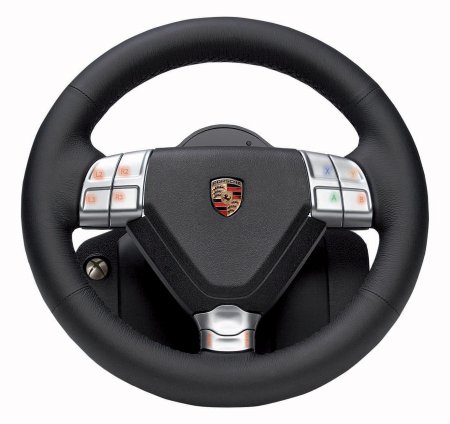 Like many other hot blooded males out there, I too, have a penchant for fast cars – although my experience has been limited to solely the digital kind as I do not have the cash to pony up for an exotic four wheeler from the local luxury car showroom. Al, how about a hefty bonus this Christmas? 😉 Well, for those who are in the same boat as me and love driving fast cars but are rather more concerned with bread and butter issues at this point in time, there is always a compromise. Fanatec, a manufacturer of high end gaming peripherals, has just announced that it will be rolling out its new Porsche 911 Turbo S Racing Wheels specially for the Xbox 360. Hmm, at least you can brag to your friends that you have a Porsche at home – never mind that it is just a steering wheel. You can choose from a trio of versions – 911 Turbo S Edition, Clubsport Edition, and Pure Edition when you place your pre-order.

These steering wheels will be available in limited quantities (just like the cars themselves, although the steering wheels definitely number less that the vehicles on the market), with the 911 Turbo S Edition being limited to just 3,000, while the Clubsport Edition is numerically less at 2,000, with the Pure Edition being the most common at 5,000. All these steering wheels have been licensed by Porsche Lizenz- und Handelsgesellschaft mbH and will come with special pricing when you place a pre-order today – the 911 Turbo S Edition, Clubsport Edition and Pure Edition will retail for $250, $400 and $150, respectively.

These racing wheels will all feature a 900° steering angle and boast a 6+1 shifter. In addition, they can also be used on platforms other than the Xbox 360 including the PlayStation 3 and PC. You can use it in tandem with whatever existing Microsoft or Logitech pedals you own, but for a greater degree of realism, there is the Clubsport Edition, which features high-end pedals that are fully made of aluminum and feature a load cell pressure sensor for the brake. Time to burn some asphalt!