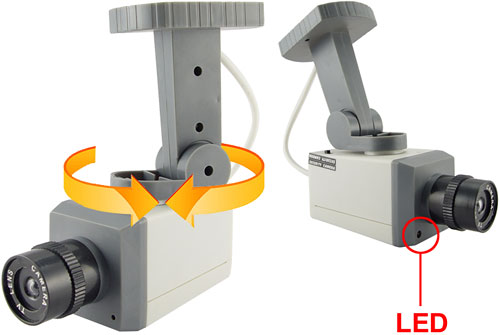 If you’ve of late worried about your safety or that of your things, security has likely become a little more important.  Well although this won’t work on the brightest criminals out there, it will at least work on the younger less bright ones.  That or the just plain unobservant bunch.  It may look a little cheap and overly plastic, however, it makes up for it with its motion sensing abilities.

The motion sensor allows for the camera to follow anyone that activates it.  It also has a blinking light to give the appearance that it’s recording.  In some ways it’s an upgrade to the Dummy IR Bullet Camera, which looks good, but doesn’t follow the target around like this camera does.  Since it does move around and have the LED light, it needs something to keep it powered up, so you’ll need 3 AA batteries.  It can be picked up for $15.50 through Chinavasion, which is slightly cheaper than the older Bullet Camera that costs about twice as much.