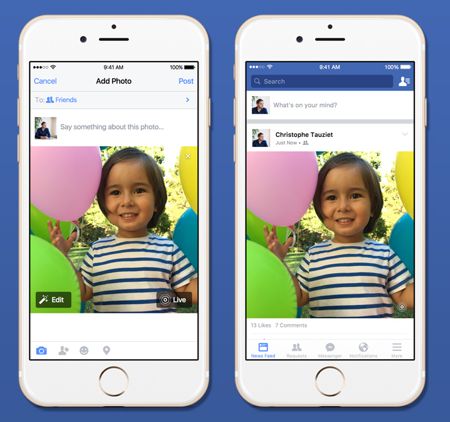 It has not been too long since Apple first debuted their “Live Photos” with the spanking new iPhone 6s – less than three months, in fact, and you can be sure that when a mover like Apple makes a move or statement like that, other major third parties are sure to sit up and pay attention. After all, it would be to their benefit that they actually find ways to integrated Apple’s Live Photos, right? Tumblr happens to be one of the parties who did offer support just some days back, and here we are with Live Photos being supported by Facebook, one of the biggest photo sharing platforms worldwide.

The update to Facebook in order to have it support Live Photos started earlier this morning, where Facebook now allows users who are rocking to their iOS app to upload as well as view Live Photos from within the app itself. There is one particular catch, of course, as Live Photos happens to be rather new at this point in time, Facebook will not be rolling out support to every single user simultaneously, as it will happen in stages. Some folks will begin to receive it already, while majority of the other Facebook users will have to wait until we bid goodbye to 2015.

Uploading a Live Photo is a no-brainer, as it is almost the same as uploading your standard still image, other than the fact that you have to perform an additional step – to ensure that the “LIVE” box which appears in the bottom right will be selected, so that whatever photo being uploaded at that point in time will be a Live Photo. If you do not tap on that box to make sure it is checked, then only the still photo will be uploaded. Are you pleased with what Facebook has done with their Apple integration?