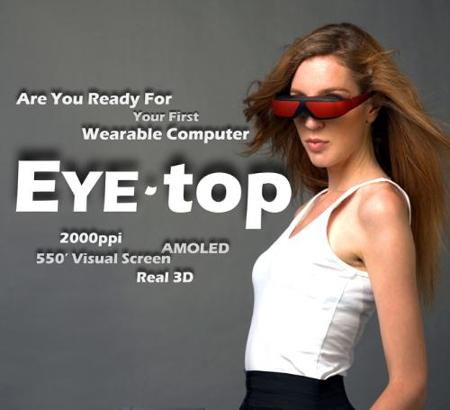 When my eyes first saw the lady in the image above wearing what seems to be an oversized pair of ruby quartz glasses of X-Men fame, the first thing that came across my mind was, since when did Jean Grey end up with Cyclop’s optic blast power? It does make you wonder actually, that Scott’s skin is so tough from the inside, so much so that closing his eyes alone are enough to contain the optic blast energy. I guess this will venture into the realm of biology and science fiction, but for now, what the model is actually wearing would be the EYETOP, touted to be the “first wearable computer”. Hmmm, now where have we heard such a claim before?

The EYETOP has apparently already ended up as a registered trademark over at the United States Patent and Trademark Office. Hailing from OLiGHTEK in China, the EYETOP continues to be one of the company’s major research and development products. Not only that, the company has also begun a new business unit just in case it has to handle the international market. Needless to say, many people would be wondering whether the EYETOP is a rip-off of the Google Glass. Winsum Ji, the president of EYETOP, explained, “A wearable computer is one kind of wearable device. The first computers that could be placed on a desk were called desktops, then, later on, when notebook computers were launched, they were called laptops. The EYETOP is a natural continuation of that concept. The device integrates a computer display and computing into a pair of glasses, and consumers can surf the net, play games, do some business once they don a pair.”

Hmmm, theoretically speaking, as the EYETOP comes with a complete computer architecture, it will then be able to handle basic computer functions such as games, movies and email. Some of the EYETOP’s hardware specifications include a 0.5” micro AMOLED micro-display that offers 2,000ppi precision, making it seem as though you were viewing a screen from 20 meters away, and boasts of all-new parallel true 3D features. Sounds good on paper bub, but we would like to see it in the flesh for ourselves.