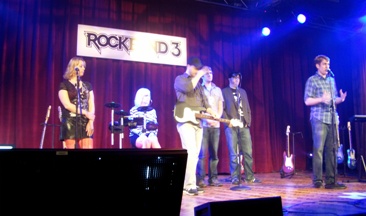 Remember when I told you that Rock Band 3 was going to get the keytar? Well, I wouldn’t say I was wrong about that, but that really is only one of several upgrades that the successful music video game franchise is receiving.

At the E3 Expo, they announced that not only will it have a keytar, but it will play like a regular sit down keyboard as well. It only has two octaves, but it is apparently designed to digitally simulate all 88 keys.

Also unveiled is a guitar that has real strings. Yes, it does beat the heck out of Power Gig: Rise of the SixString, and the demonstration showed the game identifying actual chords that a real guitarist would play. To make the game more advanced, they even have figured out a way to connect a real keyboard to the Rock Band game.

Other advancements are a filing system that allows the user to quickly find a song. Apparently, a lot of players have their Rock Band tracks all in one place, and finding one could be tough considering they plan on having 2,000 tracks by the holiday season. The user can search by artist, decade, game, and other genres.

Also at the Harmonix booth was Dance Central, a dancing game that connects to the Kinect. Both this game and Rock Band 3 will arrive shortly in the fall.