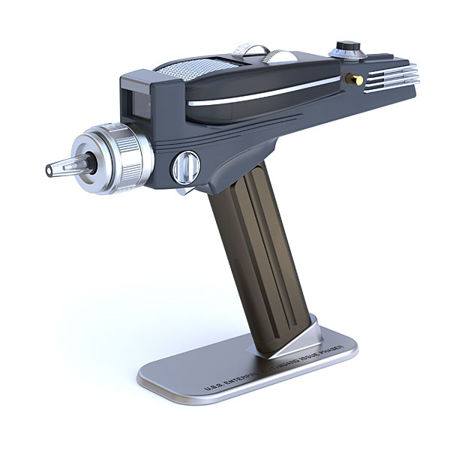 If you are a living, breathing and walking encyclopedia of all things Star Trek, then you might be interested to check out all of the various items from the Star Trek universe that might just be part of your ever expanding collection (just like the universe itself, until it starts to contract and brings an end to all life as we know it). Of course, hardcore fans might find it difficult to reconcile the fact that there might be some unscrupulous souls out there who would want nothing better than to cheat you of your hard earned money by selling you a fake item. Not so with the $149.99 Star Trek Phaser Remote Replica – this is an exclusive replica that comes with its very own metal display stand and hidden magnet.

This detachable Phaser I and pistol grip boasts of a securing bolt Protective transit case, and will function not as a weapon, but rather, allows you to have the power to control various compatible consumer electronics items in your home, since this happens to be a gesture-based universal remote control. It will also be able to play back the different Phaser firing sounds (including Phaser Overload sequence) and authentic Starship Enterprise sounds. Fret not about its authenticity, since this is an officially licensed Star Trek: The Original Series merchandise, although if you would want something that can “shoot”, you can pick this Star Trek Phaser Laser Pointer up.